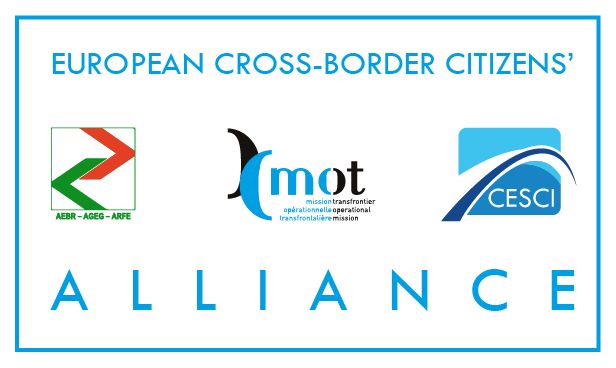 « Borders at the heart of tomorrow’s Europe »

At a time when Europe is at a turning point and is about to decide on its budget and political guidelines for the period 2021/27, the MOT, AEBR* and CESCI**, are launching a European Cross-border Citizens’ Alliance, which is addressed to the European and national authorities so that they recognise the importance of cross-border cohesion as the cement of the European Union.

“We call on elected officials, local authorities, public or private cross-border structures and (cross)border citizens to support this Alliance and to join us by becoming a signatory: click here.“
To consult the launching text of the Alliance: click here.

During the covid-19 crisis, cross-border territories were the best illustrations of the strengths and weaknesses of the European Union. If the crisis has put a strain on cooperation, it has also revealed interdependencies and cross-border solidarity initiatives, when even European states started to act in an unilateral way.

As part of a collaborative approach, we invite you to contribute to the development of the final text of the Alliance by sending your input by 15 September to: mot@mot.asso.fr.

The Alliance will be developed and enriched based on your contributions, and officially presented at the 1st BORDERS FORUM on 9 and 10 November 2020 in Paris. For more information on the BORDERS FORUM: click here.

We remain at your disposal for any further information.
With my best regards,